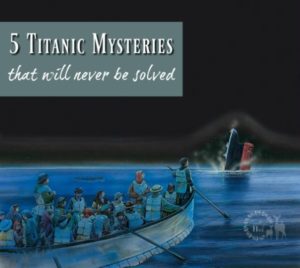 This is the 2nd post in my Titanic series "It's a rash man who says he knows the final answer to anything having to do with the Titanic." Walter Lord, author of A Night to Remember The iconic passenger liner Titanic, which now lies over 2 miles below the Atlantic Ocean, has given up some of her secrets since Dr. Robert Ballard first discovered her wreckage in 1985. But five mysteries still remain, and still befuddle Titanic aficionados. #1 What happened to Captain Smith in his final END_OF_DOCUMENT_TOKEN_TO_BE_REPLACED 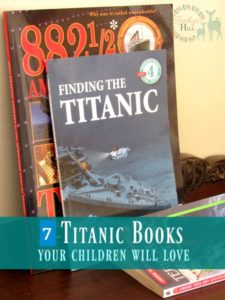 My children are a bunch of Titanic buffs because they grew up watching me devour book after book about one of history's most legendary ships. Ironically, you will never catch this Titanic afficianado aboard a luxury liner. I'm a poor swimmer and an avowed landlubber. Traversing the ocean's depths in the pages of a good book is my preferred mode of travel! My children and I have sailed through many Titanic books together (and watched several film adaptations). Here are some of our END_OF_DOCUMENT_TOKEN_TO_BE_REPLACED